IVF is a process by which eggs are fertilized in the laboratory and transferred into the uterus as embryos a few days later. IVF was originally designed for women with absent, blocked or severely damaged fallopian tubes where natural conception was unlikely to occur. Now, other fertility problems such as Unexplained Infertility, Endometriosis, Male Factors Infertility, Cervical Mucus Hostility and Polycystic Ovarian Syndrome (PCOS) are also helped by IVF. IVF is an integral part ICSI and egg Sharing/ Donation Program. 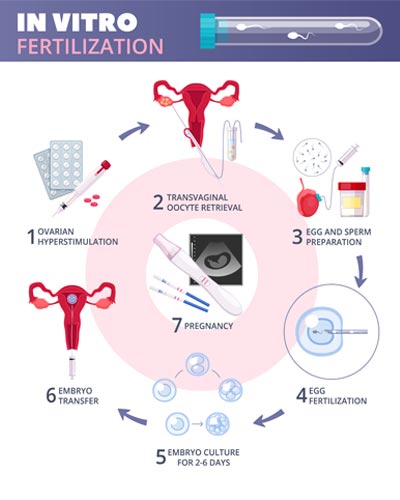 ICSI differs from conventional in vitro fertilization (IVF) in that the embryologist selects a single sperm to be injected directly into an egg, instead of fertilization taking place in a dish where many sperm are placed near an egg. 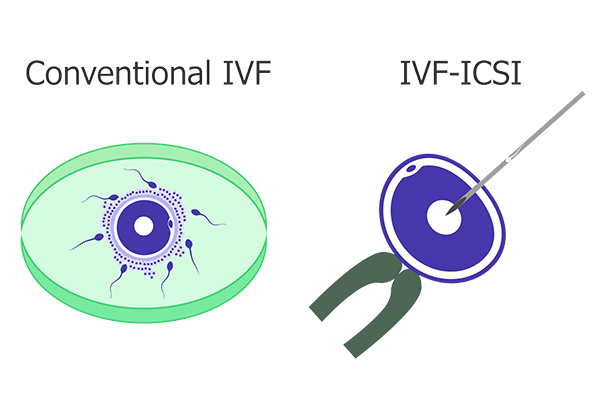 When basic treatment of natural timed relations and IUIs fails repeatedly, the couple is getting mentally ready to move further into the advanced form of the treatment (IVF-test-tube baby). They start to gather the information and then visit the doctor to understand the treatment and its costs. At this stage, the couple has started to wonder if the medications are going to have any side effects on the woman. Once they are reassured, they are now willing to do the test-tube baby treatment sooner or later. Some couples have to discuss this at home and convince them to agree for this treatment. Sometimes, the parents and in-laws may discuss the cost burden to be shared. If the understanding is low, the friction can start at this stage.

The couple prepares their funds, makes arrangements at home for help during the treatment, organizes leave and take a leap into the treatment. They are well aware that this treatment is now appearing to be necessary even though they dislike this choice. It is no more a matter of like or dislike. The worst part of this treatment is that it spans over a period of almost a month and involves almost daily injections and regular blood tests and sonographies. On top, there is no guarantee of success. This is perceived by many as the business of the fertility industry. It is sad that many who do not understand a thing about the couples tragedy and about the science of this treatment make such allegations on doctors who are making every effort over prolonged periods to get a success for the couple. The treatment needs a good facility, technology, costly medications, skilled staff and lots of costs. None of this comes cheap. Each fertility clinic has its own arrangements, but if this is not up to the mark, the couple can have a horrible experience.

Once the eggs are collected from the lady, they are mixed with the sperms in the laboratory under very sterile culture conditions. This results in the formation of the embryos (early pregnancy). The good embryos are the selected and transferred to the womb for the pregnancy to implant (stick) and grow for nine months. Unfortunately, at this stage, nature takes over and it can fail. A test is performed 15 days after the embryo transfer and the couples anxiety is very high. If it comes positive, it is hard for them to believe it at first. This is just the start of another opportunity to have a baby. Unfortunately, the pregnancy can again be in the tube (ectopic) or may miscarry. If all goes well, they are now in a dilemma whether to disclose the information to family and friends. They are afraid that if anything goes wrong in the pregnancy after disclosing to the world, it would be very difficult to handle the situation.

What is the First IVF attempt fails:

If the first IVF cycle result comes negative, it is a tragedy for the couple. The failure of the first IVF cycle is one of the most difficult moments in the entire treatment of this couple. The first experience feels very intensive as it is all very new for the couple. There is a lot to take in and lot to cope with on the personal front. Even at this stage, they are hoping for a miraculous natural pregnancy. When this first attempt of IVF treatment fails, the couple realizes that the issue is slightly more serious than they thought. Their minds open to undergo further treatment, because this looks like the only way forward. The failure of the first attempt is analyzed and the couple is given a feedback about the performance of the cycle and the details regarding the eggs, sperms and the uterus. On this basis, the couple understands the reason for the failure, the available treatment options and then they decide about the timing of their next treatment. By this time, most couples are clearly rattled by the situation and get mentally disturbed. They may take time to settle and then restart the process. If the experience with the first clinic is unpleasant, the couple is likely to change the doctor. In this case, some tests get repeated and a fresh attempt is then undertaken.

How many attempts of IVF can be done?

It is believed that IVF treatment should be successful by the third attempt. After three attempts, it is obvious that the natural capacity is not looking favorable. The egg, sperm or the uterus could be responsible for the failure, but it is the egg, which is most likely. A change of eggs may become necessary in some cases. This can be a very emotional consultation and each couple responds very differently to this situation. The first feeling is that of denial and disbelief, followed by anger and then acceptance. The couple may get angry for some of the decisions that may have gone wrong. They may have delayed the treatment and the body changes may have started. This phase of transition from self eggs to donor eggs can be of 2 minutes in some cases, few months in some and never in some rare cases. It is a very personal call and it is not about right or wrong. It is about the preparation of the mind to accept borrowed eggs or sperms. The pregnancy will be carried by the wife and no one will know about the change of the eggs or sperms.

Reproduction is an important natural instinct and it is equally important for people to have their own genes. It is insensitive to advise someone to adopt against their own wish when they can have a child using their own eggs and sperms. It takes a lot of mental preparation for anyone to have a child without their own eggs and sperms. It is very personal and individuals respond to this decision very differently. For a small number of people, this is a very easy decision. A small number would never go ahead, because they would rather remain childless. In majority of the people, their mind agrees to use borrowed eggs and sperms (if medically required), but only after they understand the medical situation and when they are thoroughly counseled about the options available to them. Borrowing of eggs, sperms from a donor or the more advanced options such as surrogacy and adoption are generally undertaken as last options by any couple. As no treatment option guarantees an outcome, it is important to be systematic and progressive in the treatment. Every effort is made by the couple and their doctors to achieve conception quickly and by using their own eggs and sperms in their own womb. If for any reason this is not possible, then they get ready for the next level of treatment. In the process, it gets tougher and tougher for them, because the decisions are getting harder and the costs are rising. The risks of failure are still looming on their head. They have only three options, stop and wait for a miracle to happen, continue further and make further attempts or to adopt.

At all times, the above options are explained to the couple. It is a choice they make on the basis of their personal feelings, circumstances and their risk taking capability. Most couples get successful and this is a unique moment for the couple as well as their treating doctors. Every effort is made by the medical team to achieve success. It is unfortunate that some poor practices bring bad name to the entire fraternity. Regulations will go a long way in achieving higher standards of care and the patients and the other involved parties will all get just and fair treatment.

What to do in case of Repeated IVF treatment failures:

In most cases, a pregnancy is achieved during the first three IVF attempts, either using the couples own eggs or borrowed eggs. The multiple attempts take a huge toll on the couples capacity to continue further-emotionally, physically and financially. By this time, the couple could be in the marriage anything between 7 to 20 years. The husband and wife have reached an advanced age and they start feeling hopeless. They are faced with difficult decisions about the path ahead almost daily. The temptation to continue never finishes. They still keep hoping that they can have a pregnancy using their own eggs and sperms. Even if they have decided to borrow eggs, they would still like the pregnancy in themselves. The thought of surrogacy is still difficult to accept. Some of them gradually start thinking of the options ahead for them. They meet the doctors, surf the internet and try to find out about surrogacy and even adoption. Even though the couple has undergone numerous years of fertility treatment, they have never understood the way surrogacy works.

To stop the treatment, do surrogacy or to adopt:

When the treatment goes to the final stage, the couple is faced with three options-To stop the treatment, Surrogacy or Adoption. This decision is influenced by three factors:

The couple is open to all options, but they fear the risk of failing and most importantly, the social acceptance. India is still ingrained with cultural beliefs and a conservative thought process. The society is unwilling to accept childless couples, surrogate children and adoption. The couple prefers to do something rather than stay childless. This means it comes down to Surrogacy or Adoption.

2. Monitoring of treatment, to measure the growth of follicles, individualise drug doses, and prevent serious side effects

3. Egg collection, usually under local anaesthetic, lasts between 10 and 20 minutes

4. Sperm sample, provided on the same day as egg collection